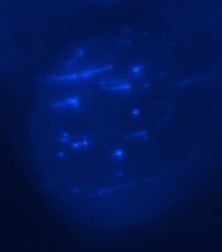 This solid-state lighting project is a collaboration between three research groups at UCSC, Dr. Carter's group, Dr. Bud Bridges in physics, and Dr. Jin Zhang in chemistry. AC Electroluminescens has been known to exist is several phosphors including doped ZnS for around 70 years; however, much of the mechanism is still up for debate. A model developed by Fischer in 1962 is the most widly accepted. In Fischer's model Cu forms CuS precpitates within the ZnS crystals (~10-20um). The precipitates are believed to be needle-like, and cause a geometrical enhancement to the electric field. In Fischer's model this large electric field accelerates electrons at one end and holes at the other of the CuS precipitates into trap states caused by dopants or activators (Al,Cu,Br,Cl are common activators/co-activators) of the ZnS crystal. When the field reverses with the applied voltage, opposite charges are injected. The holes and electrons now recombine to emit light.

Our research effort is to learn more about the crystal structures and energy levels involved in successful electroluminescnece. We attempt to understand the composition (Copper(II) sulfide or Copper(I) sulfide), size, and shape of the conducting precipiates as well as the specific mechanisim for light emission. Since ZnS is a wide band-gap semiconductor (~3.2eV), activators and coactivators are required to produce the necessary hole and electron trap-states for effective recombination and emission in the visible range (1.7-3eV)

An additional mystery concerning ZnS:Cu,Cl is that if the devices are operated for an extended amount off time light output significantly decrease. However, by annealing the sample at around 180C for 40 minutes, they can produce up to 80-90% of their original optical intensity. We are also investigating this phenomenon as an attempt to understand the light emission process by understanding the degradation.