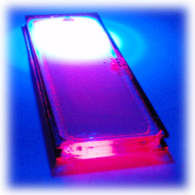 Solar concentrators are an exciting technology to augment and improve the collection of solar energy from traditional photovoltaics. Commercial photovoltaics can be broken into two main groups. Those that are expensive to fabricate yet highly efficient and those that are less expensive to fabricate but less efficient. For an expensive photovoltaic to be viable, concentrators are used to increase the intensity of the solar radiation several factors beyond the 100 mW/cm2 energy density of the sun. The most common form of concentrators are large arrays of mirrors used to track the sun through the sky. These require computer tracking systems and many motors to always keep the sunlight focused on the photovoltaic.

Luminescent solar concentrators are a novel alternative that require no tracking and can also shift the energy of the incoming solar spectrum to best match the photovolatic being used. Many dyes, polymers and inorganic crystals exhibit flouresecence or phosphorescence. This phenomenon is when a semiconducctor absorbs a photon at an energy above its bandgap and the electron-hope pair that is created looses small amount of energy to the crystal through lattice phonons until they are at the band gap. At this point they can radiatively recombine to emit a lower-energy photon in a random direction. By placing the flouresecent material between two layers of higher refractive index materials the emitted light can be waveguided to the edge of the device.

Our research has primarily focused on conjugated polymers such as MEH-PPV sandwiched between glass slides. We have found that the flourescent efficiency can be dramatically increased by using surface plasmons generated on an array of metal nanoparticles on the back glass slide. Using similar characterization techniques as our photovoltaic research has allowed us to probe and better understand the properties that would make a more optimal polymer for solar concentrators as well as the effect of the surface plasmons in enhancing florescence.